Parokya ni Edgar rocks with Tanduay in an online concert this Friday, June 19. Tanduay Isang Tinig with Parokya ni Edgar will be aired via the Tanduay Rhum Official Facebook page at 8 PM.

“At Tanduay, we encourage everyone to have Tibay ng Loob (resolve) and this event is the embodiment of that. We are staging this concert to help uplift the Filipino spirit during these challenging times and, at the same time, promote online socializing and entertainment so that we can continue to observe social distancing,” said Tanduay Senior Vice President for Sales and Marketing Paul Lim. 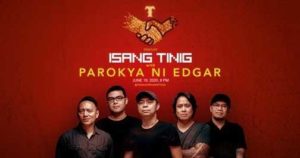 Parokya ni Edgar will be performing some of their biggest hits. They will also perform some of the viewers’ song requests.

Questions will be flashed during the concert, with special prizes awaiting lucky viewers who will send in the correct answers.

The online concert will have a tambayan segment where the band will share what they have been up to during the quarantine period. Viewers are encouraged to participate in the online interaction by sending in their comments.

This is not the first time that the popular band has performed for Tanduay.

“Parokya ni Edgar has performed with us since 2011 and has been a part of our Tanduay Rhum Rockfest and Tanduay First Five concert tour nationwide. Tanduay is a staunch supporter of OPM music and usually chooses its artists not only because of our history with them but also on how well they connect with their audience. It’s important for us to make our audience smile in these trying times,” Lim said.

DLSU and HUAWEI announce recipients of scholarship for 2021

This page is powered by