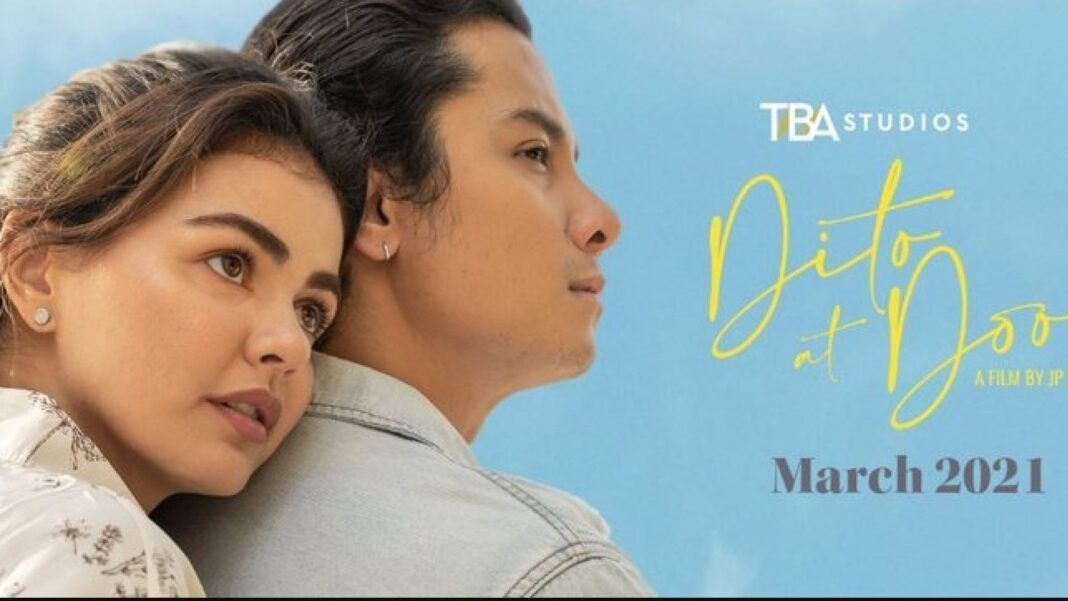 TBA Studios’ upcoming film “Dito at Doon” will proceed with its scheduled online release this coming March 31, 2021, while its theatrical release is currently on hold. The JC Santos – Janine Gutierrez romance movie was supposed to arrive in theaters nationwide on March 17.

The change comes after careful decision among the film’s producers with everyone’s health and safety as their utmost priority.

“We have decided to release ‘Dito at Doon’ exclusively online for the time being. This was a very difficult decision for the whole team, but one that has everyone’s best interest in mind,” said E. A. Rocha, TBA Studios’ CEO.

Set during the pandemic, “Dito at Doon” revolves around political science graduate Len (Janine Gutierrez) and her online/offline frenemy Caloy (JC Santos). With polarizing views and challenges of not being physically together, will their relationship survive?

The film was developed and shot during the pandemic, and was slated to be the first big local movie to be released a year since the pandemic started.

“We know how much it means for a lot of people to finally share this experience together on the big screen and we feel positive that there would still be a chance for us to do so. But for now, we are happy to offer an accessible and convenient alternative for Filipino movie fans eagerly waiting to see ‘Dito at Doon’,” Rocha added

Book now to avail of the on-going early bird promo and enjoy “Dito at Doon” for only Php 300. This special offer is for a limited time only. Regular price is at Php 350.

Film aficionados outside the Philippines will have a chance to see “Dito at Doon” (“Here and There”) too as TBA Studios prepares a worldwide release via TBA Play, the company’s premium video-on-demand (PVOD) platform soon.

“We are so grateful to everyone who has shown love and support for this film. We hope that they would continue to extend that support not just for ‘Dito at Doon’, but the whole Philippine Film Industry as well. It has been a challenging year, but we at TBA Studios remain hopeful. We appreciate everyone’s patience and we look forward to bringing this timely yet timeless, heartwarming film to you very soon.” Rocha expressed.