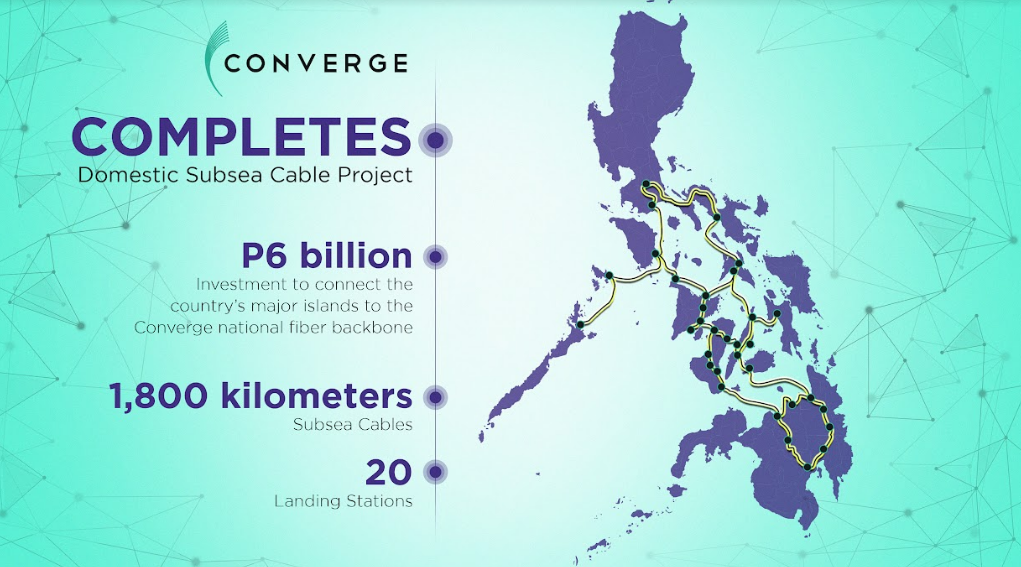 “We’re pleased to announce the completion of our domestic network’s primary and secondary routes which span the entirety of the country. Not only does this ensure availability of the service nationwide, but with the network design, we’re assured to have a resilient backbone that’s able to carry the tremendous data traffic driven by our million-plus customers,” said Converge Dennis Anthony Uy.

The subsea cables that connect to the domestic backbone of Converge are laid out in a way that there is redundancy in the network, assuring service availability even in the case of fiber cuts.

“More than the interconnection of the major islands, we’ve achieved a high level of resiliency in the network by ‘closing’ the loops on our primary and secondary routes,” Uy pointed out.

Converge interconnected Visayas and Mindanao during Phase 1 of its domestic subsea backbone rollout, first landing in Bogo, Cebu and Cagayan De Oro. Then in Phase 2, re-entered Visayas through Roxas City, Capiz in Panay Island and Mindanao through Buenavista, Agusan del Norte – closing the loops in its network. This is supported by 20 cable landing stations across the archipelago.

In terms of capacity, Converge makes use of 48-fiber core optical cables running on 400G and 800G technology, essentially boosting the network’s capacity to push huge amounts of data throughout the length of the cable.

“All these features on the network design and technology simply mean the connection on our network is more stable, more resilient, and less prone to failure or outages – wherever you are in the country,” said Converge Chief Operations Officer Jesus C. Romero.

With the country’s most modern domestic fiber backbone now live, Converge is ready to connect more unserved and underserved areas in the Philippines, putting it well on track to meet its target of covering 55% of Philippine households by 2025.

As of July 2021, the company’s fiber backbone has already reached over 80,500 kilometers while fiber-to-the home port deployment was at a record 565,848 new ports during the second quarter alone.

The network of Converge, in the first half of the year has already passed more than 8.3 million homes, while household coverage stood at 32.5% of all households in the Philippines.