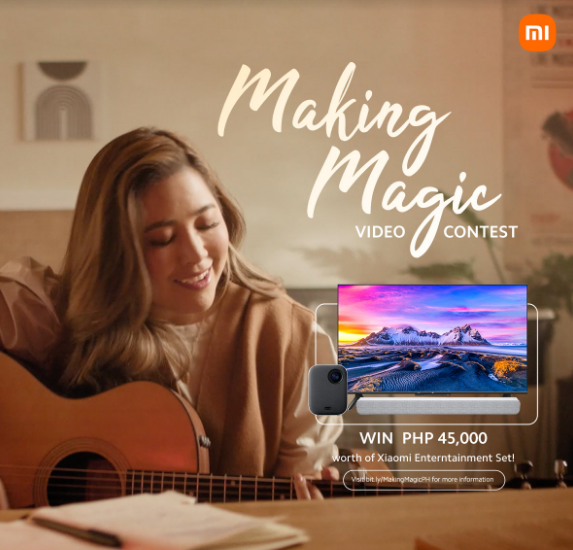 Xiaomi Philippines is inviting all aspiring content creators across the country to join the Making Magic video contest for a chance to win an entertainment package from Xiaomi, and be featured in the music video for Moira Dela Torre’s newest song, “Making Magic”.

With the launch of the newest tool for content creators, the Xiaomi 11T, Xiaomi Philippines is holding the Making Magic contest and will be handpicking the entry with the best captured cinemagic moment to join her latest music video.

Aside from being featured in Moira’s music video, the winner will also be receiving a Xiaomi entertainment package worth PHP 45,000.

Xiaomi recently launched in the Philippines new smartphones under the Xiaomi 11T family of devices – Xiaomi 11T and Xiaomi 11T Pro – all designed to inspire creativity among smartphone users.

In the recent launch, Xiaomi Philippines unveiled a new video with singer, Moira Dela Torre, who gave a snippet of her creativity process and reminding that “magic can be found anywhere” with the help of the Xiaomi 11T.

“Inspiration can come and go very quickly, especially when writing songs. That’s why I think it’s important for every creative person to have a tool that helps us capture the magic of a simple moment and fuel the best of our creativity, a tool like the Xiaomi 11T. There’s so much magic to be found in the most mundane of moments, we just need to find it,” said Moira.

The Xiaomi 11T is the powerhouse for content creation that makes cinemagic accessible for everyone through its high-resolution triple camera and a suite of AI-powered tools to boost your creativity and productivity.

The new phone features industry-leading filmmaking technology that allows content creators, even aspiring ones, to have all the equipment they will need right at the palm of their hands. Taking breathtaking shots is now easier with its triple camera featuring a 108MP high-resolution wide-angle, 120° ultra-wide angle, and 2x telemacro camera. Its one-click AI cinema modes such as Time Freeze, Magic Zoom and other types of complicated shots allow creators to create cinemagic effects with just a single click, while the Audio Zoom allows the faintest of sounds is brought to life in cinematic fashion.

The Xiaomi 11T comes in 3 stylish colors with a brushed finish including Meteorite Gray, Moonlight White, and Celestial Blue. It comes in two variants, 8GB+128GB and 8GB+256GB, with a recommended retail price of PHP 21,990 and PHP 24,990 respectively. Each purchase of the devices comes with a 1+1 year limited warranty and free screen replacement within six months.